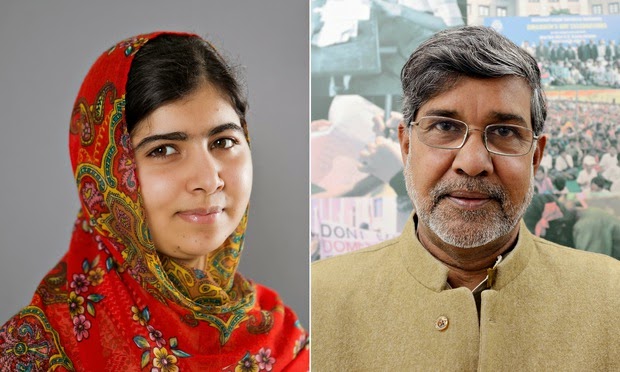 Malala Yousafzai and Kailash Satyarthi win Nobel Peace prize. Indian and Pakistani children campaigners win 2014 peace prize. Nobel Peace Prize winners Malala Yousafzai and Kailash Satyarthi. Pakistani teenager and Indian children’s rights activist beat Edward Snowden, Chelsea Manning, the Pope and Vladimir Putin to the prestigious prize.
Malala Yousafzai, the Pakistani teenager who survived an assassination attempt by the Taliban, has been awarded the Nobel Peace Prize.
The prize was awarded jointly to Malala and Kailash Satyarthi from India, “for their struggle against the suppression of children and young people and for the right of all children to education”.
“The Nobel Committee regards it as an important point for a Hindu and a Muslim – an Indian and a Pakistani – to join in a common struggle for education and against extremism,” the judges said in a statement.
The awarding of the prize to the two campaigners was celebrated widely on social media.
Last year the award was given to the Organisation for the Prohibition of Chemical Weapons (OPCW) for its mission to destroy Syria’s chemical weapons stocks.
Mr Satyarthi, 60, has maintained the tradition of Mahatma Gandhi and headed various forms of peaceful protests, “focusing on the grave exploitation of children for financial gain,” the Nobel committee said.

Ishq-e-Rasool (saww) Day in my views.

I love our Pakistan.

Review on Supreme Court of Pakistan’s situation of today.

New Year’s Resolution of a Pakistani.