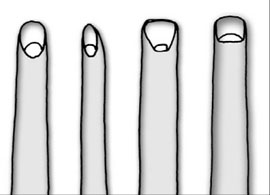 This article is by by Katina Z. Jones. Just like the five hand types, the fingers can be shaped in five different manners, each having a separate and distinct meaning in palmistry. The four basic shapes and their corresponding meanings are:
Conical: These are the fingers of wise, old souls who possess terrific insight and inner knowledge, as well as creativity; these are great friends and supportive people.
Pointed: These fingers point to expensive, eclectic tastes and a great eye for style and décor. Those with pointed fingers are also deeply spiritual and intuitive.
Spatulate: These fingers indicate predominance of the intellect; people with spatulate fingers tend to be witty and interesting, with many layers to their personalities. They are also serious workaholics and can be obsessed with success — but they always make time for serious adventure.
Squared: These fingers signal the need for simplicity and are common with people who are direct, fair, and considerate. These folks are quite willing to work hard for what they want in life, making them ideal business people who lead by positive example.
Mixed finger shapes are very uncommon; a person whose fingers have elements of two or more shapes have a tendency to be unpredictable — they show one side of themselves to the outside world, and have another side that is distinctly different and completely private. 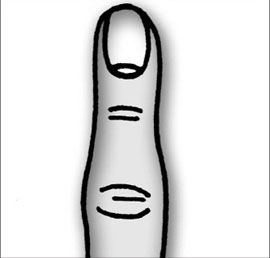 Are your fingers looking a little like they’ve been through the wringer? If you think you have “knobby” fingers characterized by knots in your finger knuckles, more than likely the cause is rheumatism or arthritis — but some knots can occur naturally without pointing to a specific illness.
Knobby fingers without a medical explanation speak to mental capacity, particularly the ability to analyze situations and come to the correct conclusions about them. People with knots in their finger joints sometimes stew over the little things in life, but have a knack for stepping up to the plate when an emergency situation arises.
People with smooth fingers are much more impulsive than their knotted-fingered counterparts. They often mistake their own hunches for proven truth. They don’t always think before they act, and end up being surprised that their actions have manifested the situation they most wanted to avoid. Often, they just don’t understand how their actions will affect the lives of others, and as a result, others see them as cold or self-absorbed. They can take an unmovable stance on a subject, often flat-out refusing to change their minds, even when the truth becomes known.
You should never try to argue logically with a smooth-fingered person; instead, try persuading them by helping them to experience the truth, make them think the correct conclusion was their decision, or let them make their mistakes and learn from hard experience. 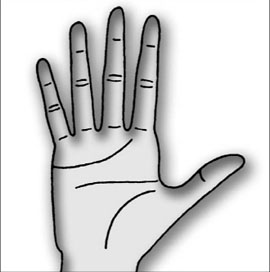 Now that we’ve looked at finger shape and joints, let’s move on to length and its meaning. The total length of a finger can be measured from the center of the knuckle to the tip of the finger. A finger is considered to be short if it doesn’t reach the joint immediately below the nail on the next-longest finger. A finger is long if it exceeds this joint in length and extra long if it is the same size or larger on what is usually the next-longest finger.
As a rule, short-fingered people are interested only in quick results. They can see people or situations with broad perspective. If the hand has a strong thumb, a long first finger, and a solid head line, short fingers can have quite a capacity for work and don’t mind “pulling the wagon” or doing their fair share of work. 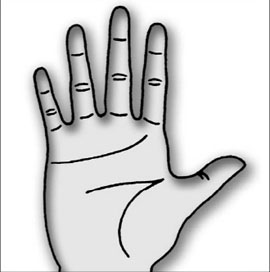 When the knots occur between the first and second joints of the fingers, this means you have an almost-supernatural power to analyze the complex — you can see things that aren’t clearly visible to others. The knots separating the second and third finger joints indicate the more mundane ability to analyze people and things.

Do you have long fingers on your hands? Long-fingered types absolutely adore details and are good “idea” people. If your fingers are unusually long, similar to the pointed or psychic type of hand, you are likely a person who gets so wrapped up in ideas and possibilities that you never act on them.