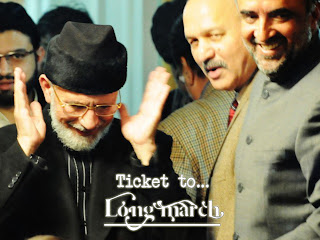 It is a fantasy based story of today’s politics of Pakistan. As we all know that it is hard for democratic governments to survive in Pakistan for accomplishing their tenure, but today it does seem that this government will complete its tenure of five years but on the tickets of Long Marches. Pakistan democracy’s fantasy or magical base story is crystal clear that if any democratic government wants to accomplish the five years tenure of their rule then the leading hit ingredient is to include long marches and some mini marches in between their running tenure. No doubt this is a fishy and tested tip. This is not only the magical fact as it has many real values such as government of Pakistan has successfully engaged the military into the indefinite conditions of politics to put their smooth decisions of cue-in on hold.
Same like as this government has welcomed by the two long marches, the first was of lawyers faculty long march of the year 2008 and the other was of Nawaz Sharif’s long march of 2009 though both were for the restoration of judiciary and some how in the end the matter was solved by the intervening of Army Chief and now this government set-up is going to be end-up with a long march which is famous as Qadri March. I do not have any idea that how much this long march helped Dr. Tahir-ul-Qadri or made him earn from this.
But one thing is sure that this time democratic set-up is not going to have any army interval of ten years for making democracy on hold, and why not after all as by the media reports; the Interior ministry has wasted 20 carores Pakistani rupees on the security and management purposes of qadri march. It is obvious that all Pakistanis do not want to waste their precious taxes on these hypaethral foreigners but still it happened, and hopefully it is not a coincidence ticket to long march.