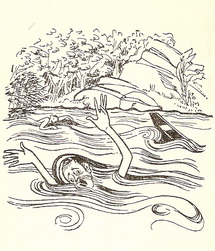 A learned scholar was being rowed across the river Ganges. The boat was small and the river was wide. The boatman rowed very slowly.
For a time the two men were silent, but the learned man could not remain silent for long. At last he said to the boatman, ‘have you read any history?’
‘No master,’ said the boatman. He continued to row slowly along.
‘That is a great pity,’ said the scholar. ‘Don’t you know of interesting things we can read about in history books? There are stories of the ancient kings and famous battles. History books tell us about the people of long ago. We learn how they lived, what they ate and how they dressed. Why haven’t you read any history?’
‘Master, I have never learnt to read,’ said the boatman. ‘I do not know any history.’
After a little time, the scholar spoke again.
‘Have you studied geography?’ he asked.
‘No, master,’ the boatman replied.
‘Geography tells us the world is round; it tells us where the continents, mountains and rivers are. We learn from geography how people live in far-off lands, and where metals, spices and precious stones are found,’ said the scholar.
‘I do not know about these things,’ said the boatman.
‘So you know nothing about history or geography!’ said the scholar. ‘Your life is hardly worth living.’
The boatman said nothing. He continued to row.
After a time, the scholar said, ‘Have you studied any science?’
‘No, master,’ said the boatman.
‘Do you really know nothing about science?’ said the scholar. ‘By studying science we find out about such things as the sun, the rain and the lightning. Scientists are very important people in the world today. You know nothing. Your life is useless; in fact you might as well be dead!’
Black clouds were now gathering in the sky. A storm was coming, and the little boat was only half-way across the great river. They would not get to the bank before the storm started.
‘Look at those black clouds!’ said the boatman to the scholar. ‘A storm is coming. Can you swim?’
Trembling with fear, the scholar said, ‘Oh dear! I cannot swim!’
‘Oh!’ said the boatman. ‘You say my life is useless because I know no history, geography or science. But you did not learn to swim, so now your life will be useless!’
The storm started. The little boat sank. The boatman swam safely to the bank, but the scholar was drowned in the great River Ganges.