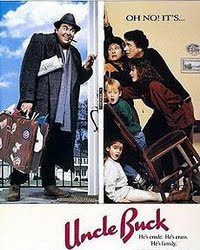 Uncle Buck was a famous American movie. It was a successful production of the year 1989. It was come in the genre of comedy and sitcom drama. This movie was made of fifteen million dollars budget. It was the America’s top three rated movie of the year. John Wilden Hughes was the director, writer and producer of the Uncle Buck movie.

John has given many pieces of art to the Hollywood film industry including “National Lampoon’s Vacation”, “Weird Science”, “Sixteen Candles”, “Pretty in Pink”, “Home Alone”, “Baby’s Day Out” and “101 Dalmatians”. John was born on 18 of February in the year 1950, in the Lansing City of the Michigan State. This famous director was died on 6 of August in the year 2009.

Tom Jacobson and Universal Studios were the co-producers of this film. The well-known musician “Ira Newborn” was composed the title sound track for this film. John Franklin Candy was performed the character of the Buck Russell. This character was started taking care of his brother’s kids in the absence of his brother “Bob Russell”. Bob’s character was played by Garrett M. Brown.

John Candy was a well-known Canadian actor. His comedy contributions are prestige pieces of him. He was died on 4 of March in the year 1994. “Cool Runnings” and Planes, Trains and Automobiles were the best outputs of his comedy efforts.

The other lead cast of the movie was Macaulay Carson Culkin, Amy Madigan, Jean Louisa Kelly, Gabriella Mary Hoffmann, Jay Underwood and Laurie Metcalf. Macaulay Culkin is famous for his major roles of the Home Alone, Wish Kid movie and Richie Rich. He has played the character of an eight years old boy in this movie.

Uncle Buck was also re-created as a television sitcom series by NBC Universal Television Group in the year 1990. This thirty minutes series was concluded on twenty-two episodes. Kevin Meaney has acted the role of Buck Russell in this TV series.