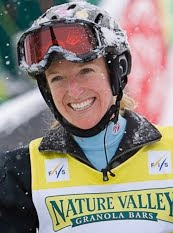 Shannon Bahrke is a famous “Freestyle Skier” of United States of America. She is a member of US Ski Team. She was born on 7 of November in the year 1980. Shannon was born in the Reno County of Nevada State of America. She has spent her early days of life in the Tahoe city of California. She has started to participate in skiing in the age of 3 years.

Shannon Bahrke is also is engaged with Matt Happe. Bahrke and Matt are interested to get marry in October of this year 2010. “Scotty Bahrke” is the brother of shannon. He is also a famous freestyle skier. The family of Bahrke belongs to the Norway. She is also a founder of a well-known coffee brand “Silver Bean Coffee Company” of America. She has started enterprising this company in the year 2008. Silver Bean is located in Salt Lake City of America.

Shannon Bahrke is a part of Winter Olympics games of this year 2010. Winter Olympics 2010 are holding in the Vancouver City, Canada. Vancouver is the coastal city of Canada. She is skiing for Olympic valley freestyle club. She is a master of playing in Dual Moguls and Moguls skiing types of the freestyle skiing.

Bahrke has won many medals for United States of America in Olympics, World Championships and World Cup games. She got injured in the world cup of Japan in February of the year 2004. She got jaw injury. This injury was cost her very expensive in a sense that she disappeared and stopped practicing for some years.

She has won bronze medal of Women’s’ Moguls Final on 13 of February 2010. She played world cup first time in January of the year 1999. She was selected first time for the Olympic team of America in the year 2002. She has won silver and bronze medals in various events of international games.