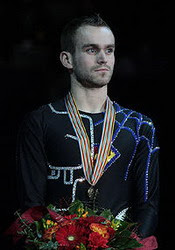 Kevin Van Der Perren is a famous figure skater. He belongs to the Kingdom of Belgium, which is located in the northwest of Europe. He was born on 6 of August in the year 1982. Kevin was born in the Ninove City of Belgium. This city comes in the Flanders region of Belgium.

His second competition will be of “Men’s Free Skating”. This game will start today at the eight of evening of the European time. Perren has participated earlier in the “Men’s Short Program” of Winter Olympics of this year. This game was aired on 16 of February. He was qualified with top12 and scored 72.90 points.

Kevin Van Der Perren is member of the KSC Heuvelkouter Club and the Liedekerke Club. He has leaded the Winter Olympics 2006 from the side of his mother-land Belgium. He ranks as the top seventh skater internationally in January of this year 2010. He has won the “Ondrej Nepela Memorial” title for the 2007 and 2008. He was also the champion of the “North Rhine Westphalia trophy in the years 2008 and 2009.

Parents of Kevin wanted him to join soccer club in his childhood but he refused. Yuri Bureiko is a current coach of him. Yuir was the famous Soviet figure skater. Figure skating is an official game of the “Winter Olympic Games”. These competitions work under the flag of International Skating Union (ISU). Figure skaters take part as single, pairs and groups in figure skating game.