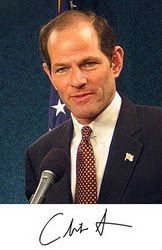 Eliot Spitzer completed his early education from New York City and went to New Jersey for further studies. Eliot Spitzer studied in the Princeton University of the West Windsor, New Jersey. He completed his Juris Doctor (J.D.) degree from Harvard Law School of Massachusetts State of America. Eliot Laurence Spitzer worked as an editor of the Harvard Law Review Issues.

Eliot Spitzer caught in a scandal of prostitution on 13 of February in the year 2008. Eliot Spitzer resigned from his post of governor on 17 of March in the year 2008. There are many cases of other politicians have been exclaim after the scandal case of Spitzer. Recently the mother of Governor of South Carolina has said that his sons’ affair is a worst example than Spitzer scandal.

Eliot Spitzer has said that he is happy to have support of his family though he was sad for breaking hearts of his voters and colleagues of politics.