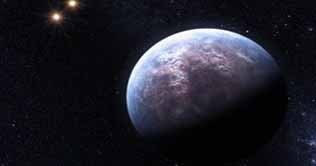 Thirty-two planets have been discovered outside Earth’s solar system through the use of a high-precision instrument installed at a Chilean telescope, an international team headed by the Geneva Observatory, who built the High Accuracy Radial Velocity Planet Searcher, or HARPS, announced. The existence of the so-called exoplanets — planets outside our solar system — was announced at the European Southern Observatory/Center for Astrophysics, University of Porto conference in Porto, Portugal, according to a statement issued by the observatory. The device can detect slight wobbles of stars as they respond to tugs from exoplanets’ gravity. The instrument detects movements as small as 3.5 km/hr (2.1 mph), a slow walking pace, the observatory said. Although only 32 were announced, the team knows of many more exoplanets, although more observation is needed before they are formally announced and papers are written about them.

Two Nishan-e-Haider Pride of my Family.

Eat Right For Your Blood Type.